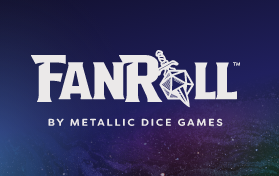 Glow In The Dark Dice: The Perfect Accessory For All D&D Fans

Whether you’re new to games with dice or a seasoned D&D player looking to take your tabletop RPG adventures to the next level, glow in the dark dice are the ultimate solution.

Here at FanRoll, our passionate team of experts have produced a special line of Glow in the Dark dice that features a range of colors, sizes, and materials. Here are just some of the reasons that every player should add a set to their role play gaming arsenal.

Glow In The Dark Dice Add To The Atmosphere

Tabletop fantasy games with dice provide lots of enjoyment under all circumstances. However, the adventures take on a whole new sense of excitement when you play them in atmospheric low lighting. Whether it’s playing with dimmed lamps or by candlelight, your dark-themed quests will instantly feel far more enchanting. GITD dice take the magical atmosphere to a new level.

Glow in the Dark dice won’t only make it easier to see the numbers when playing dark-themed games. They also ensure that all dice rolls make a bigger impact as they bring a sense of magic to the palm of your hands. Likewise, all eyes will be drawn to the dice as they hit the board and reveal the player’s fate.

When dice rolls are supported by GITD dice, the adventures will be far more memorable. Whether playing with family or friends, they will upgrade your games like no other accessory on the market.

Your FanRoll Dice Make It More Than A Game

Dungeons and Dragons is an incredible tabletop game, but it will still feel like little more than a game while playing with standard items. Glow in the Dark dice are arguably the quickest and most affordable upgrade that can transform your mindset and gaming activities. And it can be the first step to encouraging further developments.

For example, you may find that you discover a love of competitive fantasy RPG games. Alternatively, you could buy a vlogging camera and start an online YouTube channel. Whether streaming your gaming activities or simply discussing your love of particular D&D characters, the FanRoll GITD dice will make video footage of dice rolls stand out from the crowd. It could be a key ingredient in the recipe for building a bigger audience.

D&D can be so much more than a game, and Glow in the Dark dice will have a huge say in helping you realize this.

Glow In The Dark Dice Can Extend Playtime

Ever been in the middle of a D&D quest or other fantasy tabletop game only for a lack of light to put an end to your adventures? With our GITD dice, you will be able to see your roll even in low-lighting conditions, meaning that the fun can be extended to cover all situations.

Whether there has been a power outage, you’re playing on a camping trip, or your friend has decided that it’s time to call it a day because they are losing doesn’t matter. With the FanRoll Glow in the Dark dice in your hands, you have the solution to every scenario.

If you’ve ever seen hours of play go to waste due to poor lighting conditions, you’ll certainly appreciate the appeal of GITD dice. And if you haven’t, take it from us – you don’t want to learn this lesson the hard way.

When looking at Glow in the Dark dice for tabletop fantasy quests, the great news is that you are not limited to one style Here at FanRoll, we have several sets available across a variety of colors including white, pink, blue, and orange. So, you can always find an option that is best suited to the adventure that you’re about to embark on.

There are also several mini sets that are both great for travel games or family activities that include the kids. Or you can make the D20 die stand out in future dice rolls by choosing items like the 55mm Sharp Edge Blue Skull solution. All relevant games with dice can be significantly improved when the main feature – the dice – is given a little extra attention.

Parents looking to introduce youngsters to the wonders of fantasy RPG – or find a way to manage their screen time – will also find that the GITD dice are a brilliant asset.

Glow In The Dark Dice Make You Want To Play More

The global community of D&D players is estimated to stand at 50 million. Virtually all of them are looking to maximize their enjoyment. Those who find a winning solution are naturally more inclined to play more frequently. In turn, your love of games with dice can play a far bigger role in your life.

With every throw of the dice providing extra exhilaration, GITD dice are the ultimate addition to any setup. From the moment you pick up the dice to the motion of releasing them and watching them roll, every aspect feels bigger and better. As you immerse yourself in the fantasy world, the paths you tread will ultimately leave you counting down the day until your next adventure arrives.

And as you play D&D or your other favorite fantasy quests more frequently, there’s a strong chance that you’ll become a more strategic player. And let’s face it, winning will always make the adventures more fun.

Our Glow In The Dark Dice Provide Everything You Need

Most fans of games with dice love the idea of adding a customized dice set to enhance their role playing games setup. Unfortunately, there are few things worse than finding the perfect D10 0-9 only to realize that the manufacturer doesn’t make D10 -00-90s. With FanRoll, that hurdle can become a thing of the past.

Many of our Glow in the Dark packages include all seven dice that you could need for your fantasy tabletop RPG quests – psst, if you’re new to this type of game, we’ve got you covered with this guide to ‘Understanding The Different D&D Dice’.